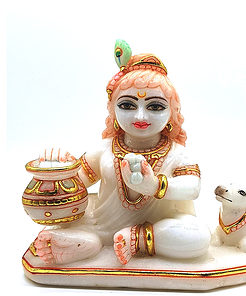 This idol is hand-crafted by our Murtikar’s and is craved out of one piece marble.

Since the idol is hand-crafted every piece has it’s own uniqueness.
Our states are specially hand painted with gold foil which never looses it’s charm and gives a lively feeling to the idols.
Our idols are securely packed individually wooden cases and shipped across taking utmost care.

Bala Krishna sometimes translated to “Divine Child Krishna“, or Bala Gopala, is historically one of the early forms of worship in Krishnaism and an element of the history of Krishna worship in antiquity. This tradition is considered as a part of the number of other traditions that led to amalgamation in a later stage of the historical development and culminate in worship of Radha Krishna as the svayam bhagwan. The monosthetic traditions of Bhagawatism and the cult of Gopala, along with The Cult of KRISHNA – VASUDEVA, form the basis of the current tradition of the monotheistic Krishna religion. The worship of Balakrishna, the divine child, while significant feature of the Krishna religion, often receives less attention, despite being one of the most popular deities of Krishna in many parts of India today. Early evidence of such worship can be found or as early as the 4th century BCE, according to evidence in Megasthenes and in the Arthshastra of Kautiliya, when Vāsudeva, as the son of Vasudeva, was worshipped as the supreme deity in a strongly monotheistic format, where the Supreme Being was perfect, eternal, and full of grace.

Some of the miraculous acts of this form are notable. Putana, a shapeshifting demoness, was killed when the baby Krishna sucked her life from her by taking the poisoned breast she offered him.

Bala-Krishna is often depicted as a small child crawling on his hands, and knees or dancing with a piece of butter in his hand.

In the Bhgawad Gita, one interpretation speculates Krishna teaching a universal monotheistic religion, a revelation of him being the svayam bhagwan. The childhood episodes of Krishna’s legend became the focus of the medieval devotional cults that started to develop into a number of movements in medieval India.

The prominent historical Site is the Balakrishna temple in Hampi built by the ruler Krishnadevaraya in 1513. Main altar of the temple is dedicated to Bala Krishna and it is one of the few temples where stories of Puranas were carved on the walls of the temple and its main tower. Other notable image is murti of Bala Krishna worshiped by Madhavacharya in his Sri Krishna Matha of Udupi. It is believed the form was transported by sea from Dwarka. Legend has it that this was the very same murti which wife of Krishna, Rukmini, had worshipped. Liberation from the world of matter required grace and dependence on God and active devotion, such as worshipping the Lord in the form of an icon (murti). Madhva placed such an icon of Bala Krishna in his monastery in Udipi where it remains to be seen by pilgrims to this day. Ever since the image was installed, Udupi has been steadily gaining in importance as a centre of pilgrimage. It is believed Madhavcharya saved drifting ship, from which he received in gratitude two large balls of chandan clay used as a ballast. To the amazement of all in each there was confined a deity form, one of KRISHNA and one of Balarama, the deity of Krishna with a churner in his hand was called Bala Krishna and was installed in the main Udupi shrine. The sacred lamps at this statue of Bala Krishna recovered from the sea in the 14th century were lit by Madhavacharya himself and are being kept burning as a part of the ritual continuously, and that is for the last 700 years.